Introduction to BioGeometry: BioGeometry is a modern environmental science that was founded by Egyptian Architect and Scientist Dr. Ibrahim Karim (PhD, D.Sc. FIT, Zurich), over the course of a research journey that began forty five years ago. We celebrated the 45th anniversary on September 29th 2016 in Montreal (Canada) together with the founder Dr Ibrahim, his family, BioGeometry’s European directors as well as over one hundred BG students from all over the world. 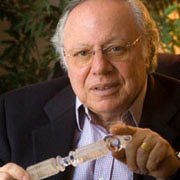 BioGeometry is an energy-quality design language of shapes, colors, sounds, and motions aimed at resonating with and amplifying a natural energy-quality combination that introduces balance to the energetic functions of biological systems.

BioGeometry uses the energy principles of shape and geometrical proportions to resonate with and amplify a specific natural harmonic pattern of energetic association, or “energy-quality.”

This key energy-quality is found in the center of the energy system of the Earth, the Universe, and all living beings.

From the dawn of humanity there have been those locations on Earth that we have held on to as special spiritual and healing locations.

What makes those locations so special? These locations are the energy centers of the Earth and by virtue of their natural design there exists a concentration of a natural energy-quality balancing combination that we now call the “BioGeometry Three” or simply “BG3.”

What is so remarkable is that the introduction of BG3 into any biological energy system begins a process of automatic energy-quality balance.

This “centering effect” introduces balance to the energy interaction process among the countless other harmonic patterns within any living energy system. BioGeometry uses shapes, based on the system of BG3 Harmonic Proportions, which resonate with and amplify this natural harmonizing BG3 energy-quality.

BioGeometry uses the energy principles of geometric proportions to introduce equilibrium into the fundamental energy harmonics of biological systems, within the overall framework of environmental energy interactions.

The science of BioGeometry has become a benchmark in the harmonization of environmental electro-magnetic and geopathic stress. The landmark BioGeometry environmental harmonization projects of the Swiss villages of Hemberg and Hirschberg, commissioned by the Swiss government and in collaboration with telecom provider SwissCom, showed a remarkable positive effect on both the environment, as well as the wellbeing and the quality-of-life indicators among the residents.

These projects led to an official interpolation in the Swiss Parliament concerning the health implications of electro-magnetic fields (EMF), and were instrumental in the recognition of electro-sensitivity (now know as “electrical hyper-sensitivity or EHS) as an allergic reaction to increased EMF exposure.

Further BioGeometry research confirmed this correlation with improved wellbeing and quality-of-life indicators, including the reduction of traditional physiological stress markers.

It is important to note that BioGeometry is not a form of medical diagnosis or treatment, but rather it offers a new methodology of scientific solutions to a new set of environmental challenges threatening our quality-of-life and wellbeing.

A pediatric conference held at the Baltimore Convention Center provided a forum for health experts to discuss the findings. Yale and Harvard scientists and doctors were particularly vocal about potentially harmful cell phone radiation to the brain development of unborn children. A correlation was found between cell phone use during pregnancy and behavioral problems manifesting in the children as they develop.

Research from the International Agency for Research on Cancer showed that pregnant mice exposed to cell phones regularly had babies that tended to have memory issues and hyperactivity. Dr. Martha Herbert of Massachusetts General Hospital and Harvard University found links between autism and the electromagnetic field of wireless internet. Wireless was found to disturb the brain’s calcium signaling and information flow, causing children to become agitated.

Cell phone radiation exposure has been linked to many types of cancer, including breast and brain cancer. A U.S. National Toxicology Program study found a strong correlation between cell phone use and brain and heart tumors. In fact, children’s brains absorb up to 10 times as much cell phone radiation from wireless technology as adults due to their thinner craniums, putting them at higher risk for impairment and brain cancer.

The younger the child, the higher the risk

The average adult checks their cell phone dozens of times a day, in some cases over 100 times. The brains of infants and young children are extremely vulnerable to cell phone radiation, whether from in the womb or near the parent checking their phone.

Therefore, it is crucial for pregnant women to keep their cell phones away from their bellies, especially near the end of their term. Ideally, a hands-free device should be used, with the phone kept as far away as possible. Young children should also be limited in terms of their use of cell phones, tablets and any other devices linked with wireless technology.